How Social Media is Changing Education For the Better 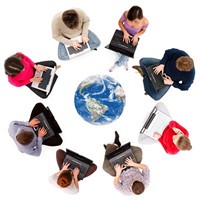 Social media is a pervasive part of our lives. It’s everywhere. It has shrunk the world, replacing traditional, less efficient means of communication. It has changed marketing and the way companies do business. In fact, if you’re a business that doesn’t utilize social media, then you’re not maximizing your business’s promotional potential.

Many educators have a similar view of social media. To them, the debate as to whether it belongs in the classroom is tired. You can either adapt, or you can languish in the past with outdated methods. This pertains not only to leveraging social media to improve the classroom experience, but also to developing students’ social media skills. If advertising, marketing, and public relations majors aren’t learning how to integrate social media into their disciplines, then they can forget about landing or maintaining a job after they graduate.

As with any type of change, there’s resistance because fear of the unknown. In many cases, that fear is justified, and educators are still working to figure out the most efficient ways to make use of social media. Those who are adamantly opposed to adopting it fail to see how it enhances the learning process. However, by looking at it from a larger scale, in the context of traditional learning, they can better understand how it actually makes things easier.

The Value of Social Learning 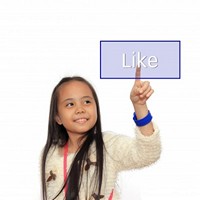 The ways in which we learn are constantly changing, as new theories are brought forth, tested, and implemented. But social constructivism is nothing new. Attributed to Lev Vygotsky, a Russian social psychologist from the early 20th century, it posits that people create meaning through experience. In the context of modern education, teachers utilize social constructivism by encouraging their students to grasp main ideas through participatory learning.

Numerous studies have shown that participatory learning is a valuable tool, and that has been reflected for years in the classroom with the use of in-class discussions. One recent study, Classroom Climate, Rigorous Instruction and Curriculum, and Students’ Interactions in Urban Middle Schools, suggests that participatory learning increases student motivation and improves collaborative skills. The exchange of ideas in group settings allows students to gain new perspectives, insight into new ways of thinking, and learn how to express their own ideas. This enables students to compare and contrast their ways of thinking while gaining a deeper understanding of a topic.

Remember gathering in a circle with your classmates to discuss a classic piece of literature in high school English? If you actually read the book, then there wasn’t a better way to understand the main points the author was attempting to put across, even if the first two or three minutes were spent merely trying to get the discussion off the ground. And it was more intellectually stimulating and fun than merely writing an essay or filling out a worksheet.

The indirect outcome of participatory learning is that students feel a closer connection to their teachers, who, by giving their students the platform to express their opinions and learn aloud, demonstrate that they value what their students’ think. Students who feel their teacher genuinely cares are more likely to perform better for that teacher. Facilitating and presiding over discussions gives teachers a hands-on means to influence the learning process while nurturing their students in an authoritative yet lighthearted manner. 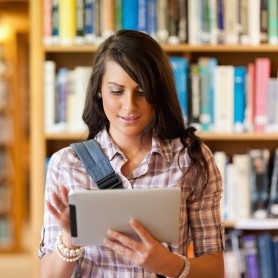 A study conducted in 2011 by researchers in China and Hong Kong, The Impact of Online Social Networking on Learning: a Social Integration Perspective, affirms that social media reinforce traditional social learning principles. The team discussed with students how those students were using Facebook in an educational context. The students revealed that the tool enabled them to connect with teachers and fellow students, share knowledge and ideas by participating in discussions, and use applications to organize and facilitate their learning.

The primary advantage of implementing social media in the classroom, whether it’s at the high school level or the college level, is that it encourages learning and collaboration outside the classroom. As any teacher will tell you, the learning process doesn’t end after an hour in the classroom (which is why they’ve been assigning homework for as long as schools have existed), and it’s a constant challenge for them to keep students engaged.

For the students whose appetite for learning is never satiated, teachers can tap into their free time by sharing lesson plans and additional learning resources on Twitter or Facebook. Teachers can feed their curiosity by building an environment in which students can share notes, YouTube videos, and online resources to supplement a lesson and enhance the learning experience.

Rosie Miles, a senior lecturer in English at the University of Wolverhampton, recently wrote an article for The Guardian in which she described how she uses Twitter to her advantage with blended learning. Her goal is to extend the study of a topic “into areas of reflection and research not possible within the constraints of a seminar discussion.”

In one instance, she facilitated a roleplaying game on the social networking site in which each of her 30 students acted as a character in Charles Dickens’s novel Bleak House and debated the motion “This house believes the law is an ass.” They each selected a Twitter name for their character, logged into a Twitter session, used a Virtual Leaning Environment (VLE) discussion forum, and composed messages, in character, of 140 words or fewer.

The result: a vigorous discussion comprised of more than 400 Tweets. The students were motivated to read the novel carefully to gain a thorough understanding of their characters. Miles points out that doing it online enabled them to act out with fewer inhibitions than they would have during an in-class reenactment. With her teaching strategy, Miles says that she gets “100% participation, much of it enthusiastic.”

Of course, how social media is leveraged to the advantage of the teacher, particularly in class, depends entirely on his or her creativity. These days, it’s not uncommon for group projects to be posted to YouTube and watched and critiqued in class. Some professors take class discussions to Facebook (as opposed to Twitter or discussion boards), attaching a face (profile picture) and personality (profile) to the students’ opinions; that way, they feel more compelled to back their assertions with spirit. In turn, the discussion is carried into class the next day, already off the ground.

Common Concerns About Social Media in the Classroom 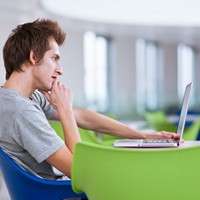 Forward-thinking educators realize that the current generation of students knows only a world with the presence of the internet. For a large portion of high school students, social media has been around for half their lives. They’re dependent on it. So why not use it to their advantage educationally? However, to teachers who subscribe to more traditional methods, or perhaps those who are just more cautious, social media is little more than a distraction.

Because federal regulations restrict certain websites in schools as a provision of the agreement to wire the schools, some teachers cannot view social networking sites in class. This not only prevents teachers from using sites such as YouTube, Twitter, and Facebook to supplement and expand their in-class lesson plans, but it also prevents them from preparing material on those sites for outside of class – at least until they leave the building. The thinking behind this corresponds with the thinking of any teacher who has yet to, by choice, use a social networking site in their class – the danger of losing control.

Imagine a lewd comment that anonymously shows up on an instructional YouTube video used in class for a project, or a discussion on Facebook that was intended to facilitate an in-class discussion the next day takes a turn toward the absurd, veering completely off course. These scenarios aren’t inconceivable. Remember, you’re dealing with a collection of 17-year-old kids. Cyberbullying and disrespectfulness to the teacher, usurping his or her authority, are realistic pitfalls and should certainly be avoided at all costs. On the other hand, when things are kept offline and entirely in class, the teacher is always present to steer it.

In 2010, Facebook addressed this problem by joining forces with the National PTA in an effort to ensure “each child, parent and teacher will have the knowledge and tools they need to harness the power of the Internet effectively – and safely,” according to National PTA President Charles Saylors. Facebook subsequently introduced a Facebook in Education page “for information about how educators can best use Facebook.” It has generated positive response, boasting 519,000 Likes and 3,486 discussions.

These sites will continue to evolve as different demands are placed upon them. Their new responsibility to foster safe and efficient learning environments is an opportunity for them to attract and maintain users long-term. It makes business sense for them to take it seriously. In the meantime, it will be the job of educators to decide whether or not the risks justify the benefits of social media in the classroom.

This entry was posted in Technology and tagged Social Media. Bookmark the permalink.