Choosing an online university is a hard decision, and getting harder because of the huge amount of targeted advertising and marketing campaigns that the largest and wealthiest schools use to get students’ attention. There are many organizations that claim to provide unbiased reviews of both online and campus universities, but even if the rating organizations seem legitimate, it can be hard to know how they arrive at their school rankings.

Different rankings may carry different weight for your personal situation as well. If you’re looking for an online college, it probably doesn’t matter much whether the school has a great athletic department. Rating agencies usually offer ratings for different general types of schools. Several useful metrics for determining the quality of a college are:

Ultimately, the factors that are important to you may not be the same factors that ratings agencies use to judge schools. Do careful research on the schools you apply to, and if you look at ratings, make sure you’re only using them to supplement other hard data you’ve found, and remember that your own needs are prime when choosing where to invest in your education.

Another great place to look for hard data about general education trends and specific schools is the Department of Education’s National Center for Education Statistics. One trend that is meaningful for anyone looking at going back to school is the increase in degrees being issued over the past several decades. The graph below shows substantial, consistent increases in degree issuance. There are more degree holders now than ever before, and competition for jobs is stiff. Making sure you get the best education is crucial in the new knowledge economy. 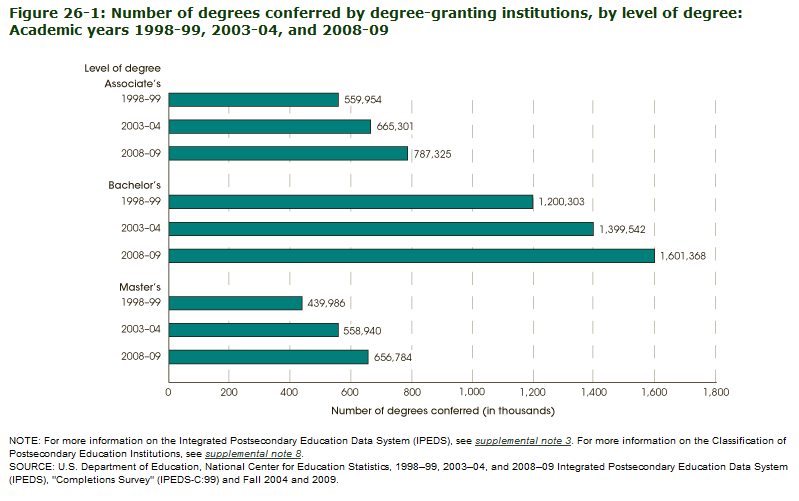 In addition to reviews by the above listed publications, it is important to consider the accreditation status of any school you might attend. Any legitimate college needs to be evaluated for its efficacy and contribution to academia in its fields. There are several regional and national bodies that provide accreditation for postsecondary education institutions. The U.S. Department of Education (DOE) does not accredit schools, but does provide a list of accredited institutions, and approved accrediting bodies.

According to the DOE “[t]here are two basic types of educational accreditation, one identified as “institutional” and one referred to as “specialized” or “programmatic.” Institutional accreditation normally applies to an entire institution, indicating that each of an institution’s parts is contributing to the achievement of the institution’s objectives, although not necessarily all at the same level of quality. Specialized accreditation normally applies to the evaluation of programs, departments, or schools which usually are parts of a total collegiate or other postsecondary institution

The accrediting process includes a battery of quality assurance tests that are applied to any institution seeking accreditation. The school that wishes to be accredited must prove that its “mission documents are clear and articulate publicly the institution’s commitments.” This criterion is intentionally left vague because it is not the goal of the accrediting body to force all schools to fit a particular mold, but to assure high educational standards in diverse institutions. Other criteria for accreditation include:

The full list of accreditation requirements postulated by the Higher Learning Commission, one of the DOE approved regional accrediting bodies in the U.S., is available at their website. You should not attend a school that is not accredited by an approved accrediting body, as a degree from that school has a lot less credibility in both academia and the business world than a degree from an accredited institution.